The Harp and the Eagle: Irish-American Volunteers and the Union Army, 1861-1865 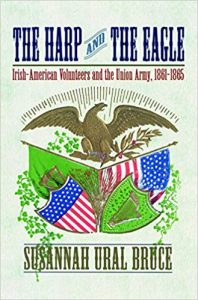 The Harp and the Eagle

On the eve of the Civil War, the Irish were one of America’s largest ethnic groups, and approximately 150,000 fought for the Union. Analyzing letters and diaries written by soldiers and civilians; military, church, and diplomatic records; and community newspapers, Susannah Ural significantly expands the story of Irish-American Catholics in the Civil War and reveals a complex picture of those who fought for the Union.

While the population was diverse, many Irish Americans had dual loyalties to the U.S. and Ireland, which influenced their decisions to volunteer, fight, or end their military service. When the Union cause supported their interests in Ireland and America, large numbers of Irish Americans enlisted. However, as the war progressed, the Emancipation Proclamation, federal draft, and sharp rise in casualties caused Irish Americans to question—and sometimes abandon—the war effort because they viewed such changes as detrimental to their families and futures in America and Ireland.

By recognizing these competing and often fluid loyalties, The Harp and the Eagle sheds new light on the relationship between Irish-American Volunteers and the Union Army, and how the Irish made sense of both the Civil War and their loyalty to the United States.

“With remarkable sensitivity and acuity Bruce goes digging among the personal and public accounts of the Irish soldiers in the Union army and presents these soldiers, and their families and communities, on their own terms so that they emerge as real people conflicted and changed by the demands of war and the obligations of ‘community.’ The result is a book of immediate interest.”
-Randall M. Miller, author of Union Soldiers and the Northern Home Front: Wartime Experiences, Postwar Adjustments

“The best book ever published on ethnic units in the American Civil War.”
–Journal of Southern History

“Bruce has provided us with an important, comprehensive book that clarifies a number of the misconceptions about Irish-American soldiers and civilians. It is eminently readable, well-structured, and impartial in its analysis….  The Harp and the Eagle will take its place as one of the most significant studies of ethnicity in the American Civil War to date.” —  The Journal of Military History

“This is a well researched and well presented work. It adds significantly to our understanding of both the Civil War as a national experience and of the Irish-American ethnic experience in the nineteenth century….  Susannah Bruce has done us an important service.”  — Irish Literary Supplement

“Bruce has adroitly plumbed the depths … to give us … an important contribution to the emerging genre of common soldiers’ histories….  An overwhelmingly fine monograph.” —  Civil War Times Illustrated

“The Harp and the Eagle … moves easily between the battle front and the home front….  This book is a good choice for a reader seeking a broader and more balanced understanding of how the Civil War affected the Irish population in the North.” — America’s Civil War

“…anyone serious about their Irish-American history will have to get The Harp and the Eagle.” — Irish Echo

“Bruce explores with astute insight the complex web of political bonds and personal motivations that sent thousands of Irish Catholic soldiers into the ranks of the Union Army during the Civil War. Her smooth blending of social, religious, political, and military history makes clear that the comprehensive contribution of Irish Catholic Union soldiers in the Civil War deserves the broad and nuanced appreciation she presents.” — Carol Reardon, author of Pickett’s Charge in History and Memory and President of the Society for Military History

“Walt Whitman’s famous caveat that anyone writing on the Civil War will never get the “real war” into the books does not hold true for Susannah Bruce’s The Harp and the Eagle.  With remarkable sensitivity and acuity she goes digging among the personal and public accounts of the Irish soldiers in the Union army to find and reveal a variegated and vigorous Irish commitment to and understandings of the Union cause, Irish “nationality,” faith, and honor, among several topics she essays.  Much has been written about individual Irish regiments, but until now no one has entered the larger compass of the Irish experiences in the war.    Bruce’s book combines the “new military history,” with its emphasis on the social, cultural, and political aspects of war, with a traditional respect for narrative and recognition that campaigns and battles were essential factors in making soldiers and deciding character.  She presents the Irish soldiers, and their families and communities, on their own terms so that they emerge as real people conflicted and changed by the demands of war and the obligations of ‘community.’  The result is a book of immediate interest, for it redraws the profile of the Union soldier, redirects the discussion as to why soldiers fought, points to the centrality and volatility of questions of ethnic and religious identity that the war magnified for all ‘Americans,’ and invites comparisons with and dissections of other immigrant and ethnic groups’ involvement in the war.  With all this, Bruce achieves the double feat of getting real Irish soldiers into the Civil War narrative and bringing the Civil War into the immigrant narrative.   After reading The Harp and the Eagle no student of the Civil War and American identity will ever leave the Irish soldier or the immigrant experience in the war on the historical margin again.”  — Randall M. Miller, Saint Joseph’s University, author of Union Soldiers and the Northern Home Front: Wartime Experiences, Postwar Adjustments

“Through wide-ranging research, Susannah Ural Bruce moves us closer than ever before to a full understanding of the real experiences, in all their glory and horror, of ordinary Irish immigrant soldiers and their transatlantic communities and families during the American Civil War.”   — Kerby A. Miller, author of Emigrants and Exiles: Ireland and the Irish Exodus to North America