Hood’s Texas Brigade: the Soldiers and Families of the Confederacy’s Most Celebrated Unit 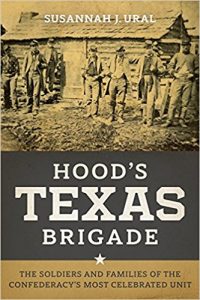 One of the most effective units to fight on either side of the Civil War, the Texas Brigade of the Army of Northern Virginia served under Robert E. Lee from the Seven Days Battles in 1862 to the surrender at Appomattox in 1865. In Hood’s Texas Brigade, Susannah J. Ural presents a nontraditional unit history that traces the experiences of these soldiers and their families to gauge the war’s effect on them and to understand their role in the white South’s struggle for independence.

According to Ural, several factors contributed to the Texas Brigade’s extraordinary success: the unit’s strong self-identity as Confederates; the mutual respect among the junior officers and their men; a constant desire to maintain their reputation not just as Texans but as the top soldiers in Robert E. Lee’s army; and the fact that their families matched the men’s determination to fight and win. Using the letters, diaries, memoirs, newspaper accounts, official reports, and military records of nearly 600 brigade members, Ural argues that the average Texas Brigade volunteer possessed an unusually strong devotion to southern independence: whereas most Texans and Arkansans fought in the West or Trans- Mississippi West, members of the Texas Brigade volunteered for a unit that moved them over a thousand miles from home, believing that they would exert the greatest influence on the war’s outcome by fighting near the Confederate capital in Richmond. These volunteers also took pride in their place in, or connections to, the slave-holding class that they hoped would secure their financial futures. While Confederate ranks declined from desertion and fractured morale in the last years of the war, this belief in a better life―albeit one built through slave labor― kept the Texas Brigade more intact than other units.

Hood’s Texas Brigade challenges key historical arguments about soldier motivation, volunteerism and desertion, home-front morale, and veterans’ postwar adjustment. It provides an intimate picture of one of the war’s most effective brigades and sheds new light on the rationales that kept Confederate soldiers fighting throughout the most deadly conflict in U.S. history.

“Susannah J. Ural’s Hood’s Texas Brigadeperceptively explores one of the most successful combat units in the Civil War. Tracking their lauded military service, as well as their backgrounds and beliefs, Ural creates a nuanced portrait of soldiers and the families that sustained them. These southerners, unabashedly committed to slavery and the Confederate cause, displayed little doubt or trepidation about the war or its cost. Confederate defeat left them defiant but no less determined in their beliefs. Ural’s compelling account provides fresh insight into the Confederate military experience and its lasting legacy.”
—Lesley J. Gordon, author of A Broken Regiment: The 16th Connecticut’s Civil War
“Hood’s Texas Brigade gives us a refreshing new template for the study of Civil War units. Its focus on the brigade as a community of citizen-soldiers in the context of combat yields the best of both social and military history. Deeply researched and lucidly written, Susannah J. Ural’s work on the Texans in Lee’s army provides a model for the way military organizations should be analyzed.”
— A. Wilson Greene, author of A Campaign of Giants: The Petersburg Campaign from the Crossing of the James through the Battle of the Crater
“Ural’s rich and wonderfully textured account of Hood’s Brigade brings to life the men who fought in one of the war’s most celebrated units. But more than that, this compelling narrative weaves gracefully back and forth between battlefield and Texas home front, offering a richer, more complex portrait of a society at war.”
— Caroline E. Janney, author of Remembering the Civil War: Reunion and the Limits of Reconciliation
“This is a superb book. Beautifully written and deeply researched, it sheds new light on who the men of the Texas Brigade were, their motivation to fight, why they were one of the elite units of the Army of Northern Virginia, and how their war experience shaped the postwar lives of the survivors. This is Civil War-unit history at its best.”
— D. Scott Hartwig, author of To Antietam Creek
This entry was posted in Publications and tagged American Civil War, confederate, Texas, veterans. Bookmark the permalink.